How to Beat Dragonkin Soldier of Nokstella in Elden Ring

Elden RIng’s challenging bosses can be found in every nook and cranny in the game world. Overworld, underworld, and everything in between, all house stomach-churning hostile creatures.

The Dragonkin Soldier of Nokstella is one underworld boss that strikes fear into its opponent’s eyes without fail, thanks to its towering size, nightmarish features, and overpowered the second phase. Fear not, though, as the Dragonkin can be conquered with relative ease, as long as you play your cards right.

The Dragonkin Soldier of Nokstella vaguely resembles a dragon-like monster that lives in the undergrounds of Liurnia of the Lakes. They’re secluded from the rest of the game world creatures and take solace in their ice lightning powers.

Weaknesses: Dragonkin Soldier of Nokstella is weak to Slash damage.

Start your journey from Ansel River Well. Enter the building and descend on the platform in the middle of the floor, which will take you to Ainsel River.

Once it takes you down to Uhl Palace Ruins, head northwest toward the building while avoiding enemies, make your way over the stairs, run as quickly as possible to the rock wall, and use it as cover from the enemy projectiles right over the sets of stairs.

Keep heading southwest until you reach a corpse on the edge of a cliff. Jump down to the lower cliff’s edge and then the water stream. Continue heading north until you reach the entrance to the boss fight, identifiable by the mist covering it. 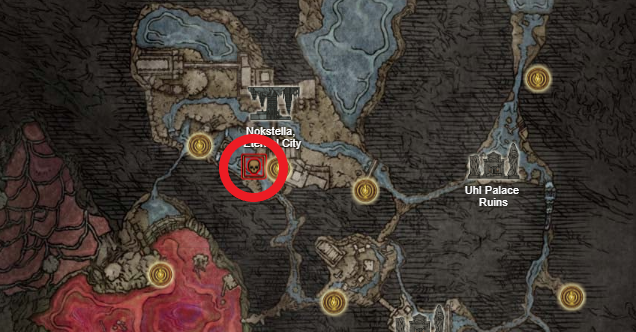 How To Beat Commander Niall in Elden Ring

Some preparation is needed before you head into battle. The tips below will help you capitalize on any weaknesses and prepare you to face the Dragonkin Soldier of Nokstella.

What level should I be to fight the dragonkin soldier of Nokstella?

Since the Dragonkin Soldier of Nokstella is accessible as soon as you enter Liurnia of the Lakes, which happens fairly early in the game, you will likely need to level up your character before embarking on this boss fight.

If you are any lower than level 60, go back and level up your character, focusing on their vigor and attacking stats so that you can both deal and tank significant damage.

Due to the boss’s sheer size, its attacks cover a massive area, making it difficult for you and your summons to dodge and survive its attacks.

This severely reduces the life expectancy of melee spirit ashes, as they will be on the receiving end of the Dragonkin’s attacks at all times. Not to mention that melee spirit ashes will make anticipating and dodging the boss’ attacks even more of a chore, as it will randomly alternate between attacking them and yourself.

Ranged spirit ashes are most ideal for melee players, as they will deal damage to the boss without sustaining much damage back or disrupting your flow.

On the other hand, Tanky spirit ashes are great for ranged players, as they’ll distract the boss and outlive its attacks, offering you numerous striking opportunities throughout the boss fight.

Here are our picks for this boss fight:

Exploit the boss’ weakness to slash damage by using slashing weapons. Fast slashing weapons are the preferred choice for this boss fight, as your striking windows will be short and swift-ending.

Our picks for this boss fight are Uchigatana, obtained from a corpse in the Deathtouched Catacombs in Limgrave, and the Lordsworn’s Straight Sword, which Godrick Soldiers usually drop in Limgrave.

Equip items that increase your resistance to Frost

Most, if not all, of the boss’s second phase attacks, incur frostbite build-up and major damage, further aggravating the severity of sustaining damage from the boss.

While a few items specifically aim to negate frostbite build-up, you can use items that increase your robustness and, therefore, your resistance to frost damage.

Our picks for this boss fight are the Stalwart Horn Charm talisman and Thawfrost Boluses.

It is now time to put together a plan of action and implement the knowledge about the Dragonkin to gain the upper hand in this boss fight and breeze right past the boss.

Position yourself near the boss’ feet

The Dragonkin Soldier of Nokstella’s only exposed and vulnerable body part is its feet, lacking any defense mechanism.

Placing yourself between the boss’s feet and under its body will put you in a striking position. However, it is a rather risky affair, as you will have no clear vision of the boss’ movement, and therefore, you can not read or predict its coming moves.

Your best bet is to target one of its feet from the side and keep moving alongside it, allowing you to both attacks and anticipate any incoming retaliation from the boss.

Don’t lock onto the boss.

Since you will be positioning yourself behind or beside the boss to maintain a visual on it, locking onto the boss will defeat that purpose and take your focus away from its face and arms, which are the real danger.

It can also become quite disorienting, especially during the second phase, as the Dragonkin’s movement becomes more volatile and erratic.

Watch out for the boss’ earthquake attack.

Once you notice the Dragonkin place its hands on the ground and keep still for a while, anticipate an earthquake and react quickly by rolling or running away from the boss.

This attack can not only deal significant damage but also drop you to the ground, leaving you vulnerable to a second attack. Avoid it at all costs, especially during the second phase, as it will also build up your frostbite meter.

Keep within range of the boss during the first phase

You will be relatively safe from any surprise lunges or charging attacks during the first phase, as the Dragonkin’s first phase attacks are rather slow and telegraphed. The only real worry is the boss’ combos, which can be evaded by rolling away from them.

As a melee player, you will already be keeping a close distance from the boss. On the other hand, Ranged players might feel as though it is counterintuitive to keep within the melee range of the boss, but we heavily advise you to do so, as it will help you strike more accurately and evade the boss’ attacks more successfully.

Dodge through the boss’ lunge

The Dragonkin will often dive toward you with its whole body during the second phase, leaving you no room to go. As long as you time your dodge correctly, you can roll into the lunge and come out the other side scot-free.

After evading this attack, the Dragonkin will be vulnerable and open to a heavy attack. Rush toward the boss and capitalize on its vulnerability.

Make sure to jump over frost AoEs.

The boss will shoot numerous frost projectiles at the ground, creating sizeable frostbite AoEs. These frostbite AoEs will only deal damage to anything in direct contact with them, meaning that you can evade them simply by being airborne.

Unless you are certain that you can roll out of the AoE before it activates, refrain from rolling, as you will still be in contact with the ground and sustain damage.

Try to time your jump right before the AoE activates.

Be wary of your surroundings.

Keep an eye on the numerous obstacles scattered around the arena and avoid bumping into them and cornering yourself against one of them.

As well as that, you should keep your fight with the boss as far away as possible from the golden temple, as there is a waterfall right beside it, which you can easily fall into and die if you are not careful.

How to cheese Dragonkin Soldier of Nokstella?

Despite FromSoftware’s best efforts to eliminate any possible shortcuts to beating boss fights, the Elden RIng player community continues to discover effortless tactics to go through boss fights, and the Dragonkin Soldier Nokstella is not different.

You will need to make your character as light and nimble as possible by removing any armaments, barring your weapon for this cheese strategy.

Run straight towards the boss, place yourself in the crevice behind its right knee, and turn the camera to face your character. Do not, at any point, lock onto the boss. You need to keep attacking the back of its knee while moving the camera to keep it facing your character.

Despite the Dragonkin’s best efforts to get you out of there, it will only drag you along with it, keeping you in the same advantageous position.

Once you defeat the Dragonkin Soldier of Nokstella, you will receive the following rewards:

There we have it. That is all there is to know about the Dragonkin Soldier of Nokstella. All you need to do from here is take on the strategies and tips from this guide and apply them to your boss’s fight with the Dragonkin. Best of luck!

The Legend of Zelda Breath of the Wild: Rin Oyaa Shrine Guide

How to Beat Dragonlord Placidusax in Elden Ring

How to Beat Morgott the Omen King in Elden Ring

VALORANT: How to Peek

How To Destroy Anti-Aircraft Guns In Far Cry 6