You probably already watched the Teenage Mutant Ninja Turtle(TMNT) movie and wanted to know more about these turtles and their names or colors. If you haven’t watched it, don’t worry, I won’t spoil the plot for you!

Here is the TMNT Trailer 2!

Here is a quick guide and reference for you below.

What are the Ninja Turtle Names? 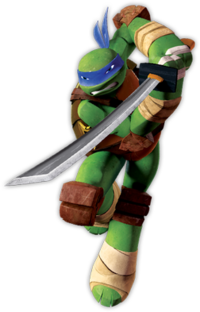 He is the eldest leader of the turtles and is spotted with a blue bandana! His signature weapons are 2 ninjatos. Ninjatos look a lot like Katanas. Being the leader, he is very disciplined and calm. These are important traits of a leader and he shows no weakness. When the grand master splinter is not around, Leonardo is the one in charge of all matters regarding the turtles. In terms of tactical and strategic combat, Leo reigns supreme.

Fun Tip: Often at loggerheads with his brother Raphael.  He is named after the legendary painter Leonardo da Vinci. 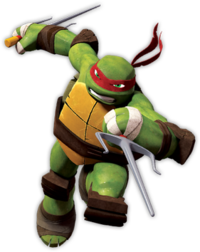 The hot headed and “rebel” turtle out of the 4. He wears the red bandana and his signature weapons the twin sai. Being a hot headed fellow, he often experiences a range of emotions such as aggressiveness, anger, rebellious and crestfallen. Due to his emotional nature, he often clash heads with his older brother Leonardo. On the other hand, he has a much friendlier relationship with younger brother Michelangelo. 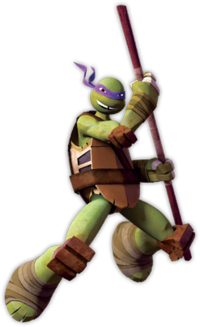 Donatello is the science and technology geek of the 4 turtles. He wears the purple bandana and his signature weapon is the Bo staff. Who doesn’t like a turtle that kicks ass with just a staff? He is a very smart turtle and is also considered the vice leader of the group. He is also very mello and calm like Leonardo, hence he is suitable traits to be a leader. When it comes to technology stuff such as deactivating computer systems, Donatello is the man! 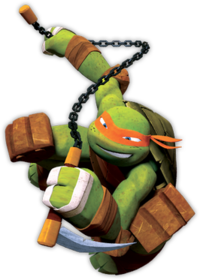 He is the youngest turtle out of the 4. He wears the orange bandana. His signature weapons are the dual nunchucks. His character is extremely fun loving, care free and the laid back. He is the crazy and wild brother you would have. Any out of the ordinary ideas would definitely be from him.

While the 4 turtles often take the spotlight, the supporting cast is also a huge part of the team. I often see people asking who is that ninja turtle rat’s name? The answer is below!

He is the teacher(“sensei”) of the turtles. He is a mutant brown rat. A zen philosopher and a master of ninjitsu, he adopted from the pet store. He also has an eternal rivalry with the foot clan which will be depicted in the movie and also the series which I will not spoil it for you.

The only human in the team of mutants! She helps the ninja turtles with public relations and anything work related to the general public. The interesting part is that April and Donatello have some love interest going on. Won’t spoil too much for you as you will have to go watch TMNT!

How to Soon Play Xbox 360 Games on Xbox One

Vince Gilligan had Thought of a GTA-Inspired Breaking Bad Game

Sonic the Hedgehog 3 Gets Release Date